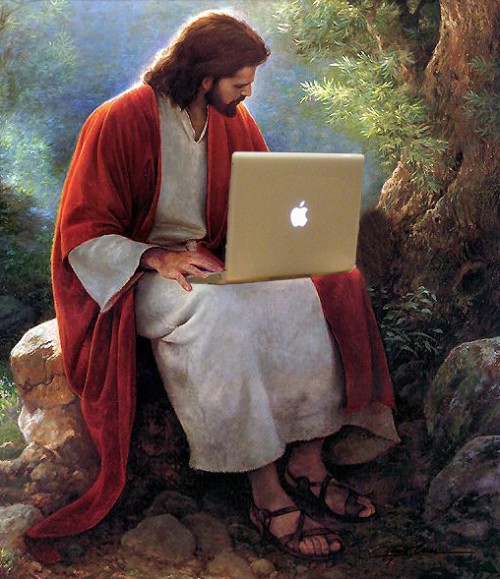 Jesus and Satan were having an on-going argument about who was better on the computer. They had been going at it for days, and frankly God was tired of hearing all the bickering.

Finally fed up, God said, ‘THAT’S IT! I have had enough. I am going to set up a test that will run for two hours, and from those results, I will judge who does the better job.’

So Satan and Jesus sat down at the keyboards and typed away.

They e-mailed with attachments..

They created labels and cards.

They created charts and graphs.

They did some genealogy reports .

They did every job known to man.

Jesus worked with heavenly efficiency and Satan was faster than hell. Then, ten minutes before their time was up, lightning suddenly flashed across the sky, thunder rolled, rain poured, and, of course, the power went off…  Satan stared at his blank screen and screamed every curse word known in the underworld.

Finally, the electricity came back on, and each of them restarted their computers. Satan started searching frantically, screaming:

‘It’s gone! It’s all GONE! ‘I lost everything when the power went out!’ Meanwhile, Jesus quietly started printing out all of his files from the past two hours of work.

Satan observed this and became irate.

‘Wait!’ he screamed. That’s not fair! He cheated! How come he has all his work and I don’t have any?’