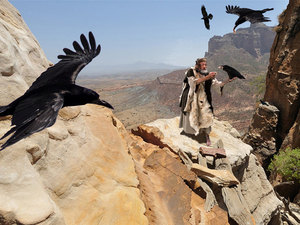 We have to do a better job of simply following instructions…period. We can be putting something together and the instructions call for a Phillips screwdriver…we’ll use a flathead. The recipe said 30 minutes at 300 degrees and we’ll do 20 minutes at 350. Why do we have trouble following directions? More importantly, why do we get frustrated when our way doesn’t work? Why do we keep trying new ways and using our own logic instead of following directions? There is value in following directions, especially when God gives them to you. In this post, we’ll look at Elijah, one of the major prophets. He showed us a few reasons why we need to simply follow Gods directions.

Basically, times were bad. King Ahab wasn’t handling business like he was supposed. He was creating alters and worshiping other kings. Go read chapter 16. It says he did more evil in the eyes of the Lord than all before him. God sent Elijah to King Ahab with a message that said, its gonna be drought, no rain or dew for 2 years until I say so.

We’ll pick up at 1 King 17 verse 2 after Elijah told the King it would be a drought.

1 Kings 17
2 Then the word of the Lord came to Elijah: 3 “Leave here, turn eastward and hide in the Kerith Ravine, east of the Jordan. 4 You will drink from the brook, and I have directed the ravens to supply you with food there.”
5 So he did what the Lord had told him. He went to the Kerith Ravine, east of the Jordan, and stayed there. 6 The ravens brought him bread and meat in the morning and bread and meat in the evening, and he drank from the brook.

It didn’t say how. He could’ve had a dream or some random stranger could said something in passing. The key here is having a relationship with the Lord so you can identify when the Lord is talking to you. Elijah had a great prayer life so he was able to recognize when God was talking to him.

If you are struggling to hear the voice of God and not sure when he’s talking to you, you may need to pray more. You have to communicate with him frequently, so you can get familiar with his voice.

The Lord will give you directions that don’t need interpretation. He gave Elijah a time. He gave him direction. He told him the location and area he should be in.  God does the same to us. He won’t give us directions we don’t understand. We have to do better at following the directions step by step.

Point 3. It might not make sense.
Verse 4 said. “You will drink from the brook, and I have directed the ravens to supply you with food there.”

We have to realize God operates in the supernatural. We start looking at things in the natural and it won’t make sense. If I’m Elijah, I’m like Lord, so how am I going to drink from the brook if its a drought? Lord, ravens are scavengers. They don’t share. You mean to tell me they gonna bring me their food?  Either that, or we start complaining. Lord, I don’t want no bird food. We have to stop doubting the power of God. The Lords ways are mysterious and sometimes, we don’t need to know why. We just need to believe.

Point 4. Do it anyway
Verse 5 said. “So he did what the Lord had told him. He went to the Kerith Ravine, east of the Jordan, and stayed there.”
Elijah followed the instructions. We need to do the same. We have to stop procrastinating. We have to stop being lazy and making excuses. We just need to get it done.

To Elijah, he expected the Lord to do what he said. I want to encourage us to have those same expectations. When we pray about something and God gives us the answer. If that answer requires us to do something, and it usually does, then you have to do it expecting God to follow through on what he said he would do. That’s where faith kicks in.  Somebody reading right now has been praying for something and God has given you directions on how to handle that. I want to encourage you to follow through…even if you don’t understand fully. God may have a supernatural blessing attached to your faith, and if you don’t believe…then you may miss that blessing.